So for the past two weeks we’ve talked about schemes, or the overarching philosophy of a unit (in our case, the offensive unit). We learned about five basic schemes and dove a little deeper into the waters of this whole option offense movement in the NFL. Today, we’re moving onto formations – and you’re in luck! We’ve already been over this and you may not have even known it!

If a scheme is the meal (breakfast), a formation is the dish of choice (pancakes). We’ll talk more about plays next week, which are the specific ingredients that make everything come together (flour, milk, butter, syrup).

So what’s a formation? It’s how players are aligned on the field at the snap of the ball. Formations aren’t just isolated to offense; the defense and special teams units have specific formations that they use as well.

Think it sounds complicated? Not at all! In fact, we’ve already covered most of this in different contexts. You’ll fly through this in no time.

Here are a few common formations that you’ll see on offense and defense: 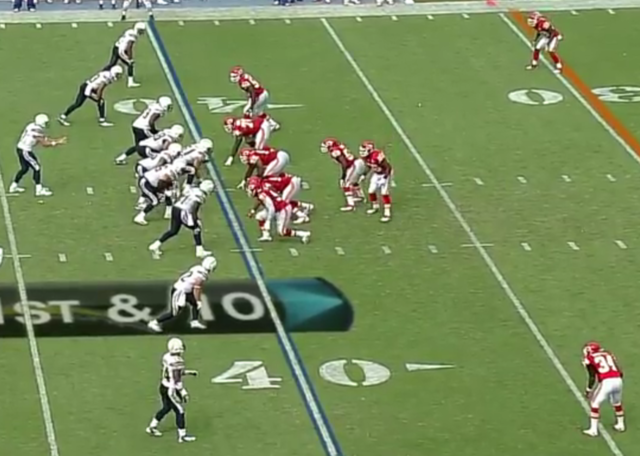 See how far back Phillip Rivers is? He’s taking the snap from the shotgun formation, 5-7 yards behind the Center.

Moment of truth: we can also determine the basic offensive scheme the Chargers are running in this play just from looking at this picture. Go ahead and give it a try!

If you guessed spread offense, you’re right on. It’s spread and not spread option because there is no one in the backfield to run the ball; all of the receivers are spread out along the line of scrimmage so this is a passing play with no option for the run.

Oh, people! Look at this! Way back when we talked about personnel groups, little did we know we were actually looking at a split back (or pro set) formation:

The Packers are going to help us out with this one:

The I-formation is an easy one to figure out, since the players literally line up in an “I” behind Center. The quarterback and running backs form a straight line back in this classic formation.

Oh, hey! Guess what! We know this one too, from our Basics of Defense lesson:

In a 3-4 formation, there are 3 defensive linemen up front with 4 linebackers behind them. Hence: 3-4.

If you’re guessing that this formation employs 4 defensive linemen up front with 3 linebackers behind them…you win! That’s 100% right: 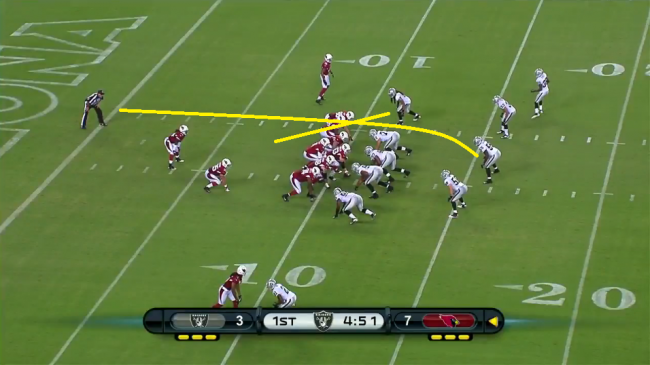 Moment of truth, defense: We know from last week’s film room post that one corner is playing man coverage and the other is playing zone.

Isn’t knowing that such a thing of beauty?

Ok, now let’s throw a little caution to the wind here, because you have to be careful with this whole 3-4/4-3 business. Some tricksters, like, say, the Hoodie, throw a few surprises into the mix: 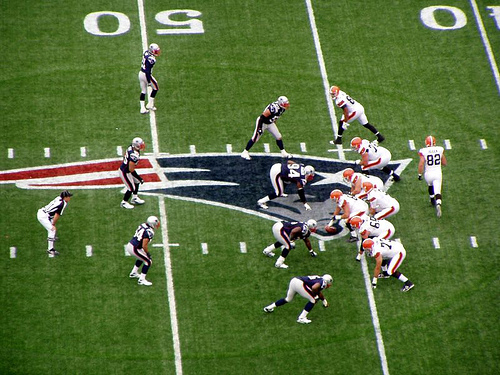 That’s a 4-3, right? Nope, not in this case. See that 4th defensive player on the left up front? See how he’s in a 2-point stance (standing up), not a 3-point stance (one hand on the ground)? That’s because he’s a linebacker. He’s just playing on the defensive line on this play; he’s not one of the defensive linemen. This is still 3-4: 3 linemen, 4 linebackers, even though it looks like 4-3. The linebacker who is up front in this play probably isn’t going to act like a lineman – he’s not going to help block the offensive line – so he’s not part of the linemen equation. There are still 3 linemen, 4 linebackers.

Does all of that make sense?

If not, leave any and all questions in the comments below and we’ll chat about what’s still muddy!

One thought on “Fundamentals : Formations”