Before we begin, let’s talk.

You’re going to see something terrible on this week’s film.

And that something terrible is the Bucs infamous creamsicle throwback jerseys. 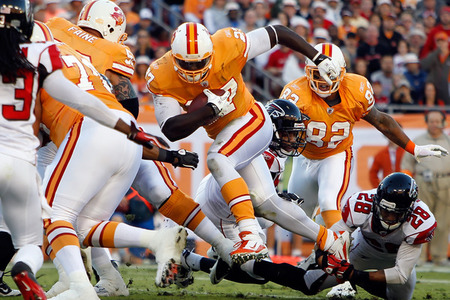 They’re something special – when special is used in the southern “bless your heart” kind of way. I really thought they were the worst jerseys in the NFL, but then this happened and I had to reevaluate. Current status: third worst. So watch with caution:

1st Down (Get Off the Line)

Defensive tackle Cedric Ellis explodes off the line of scrimmage as soon as the ball is snapped. It’s this speed and power  that enables him to avoid the left guard who is trying to get “across his face” – which sounds like football lingo but it means just what it sounds like it means – the guard is trying to get to the other side of Ellis’s face to pull him outside and open up a lane for the running back. Since Ellis beat the guard off the line, he was able to split the gap in the offensive line (run through it) and block the running back.

2nd Down (Staying Home on the Backside)

“Staying home on the backside” doesn’t sound like something many people would want to do. It doesn’t sound all that appealing. But it’s actually not that bad. It just means that the defender – in this case, safety Roman Harper – is going to stay where he assigned in the alignment (staying home), which on this play turns out to be the side the ball isn’t moving toward (the backside). So staying home on the backside means staying where you were originally designed to be even if the ball carrier goes in the opposite direction. You can see how this would wreak havoc on a player’s natural instinct to run toward the ball, thus making Harper’s disciplined, veteran move all the more praiseworthy. Because he doesn’t panic, he’s able to help his teammates close the inside gaps and prevent the running back from getting into the end zone.

And that’s not even his last highlight! Well done, Roman, well done.

3rd Down (Closing Down the Line)

It sounds like something you do at the end of a shift at a grocery store, right? But all this means is that safety Malcolm Jenkins doesn’t make a beeline to the backfield just because that’s where the ball is at the moment. The Saints are great at making good decisions based on fundamentals regardless of circumstances (and can’t we all use a little bit of that in real life, too?). Instead of rushing to the quarterback or running back, Jenkins stays close to the offensive line, running in line with the heels of the offensive lineman until he can read where the running back is headed and make the tackle inside. If he had gone straight to the running back immediately, he would have gotten there too late and missed the tackle. Good fundamentals led him to make the perfect stop for a loss.

4th Down (Staying in Coverage)

Once again we see Roman Harper doing his job like a boss. He doesn’t freak out and go straight to the backfield. He stays in the end zone, covering the tight end and taking him out of the play as a potential target, just as he was assigned. He trusts him teammates to get to Freeman and put pressure on him as well, which they do.